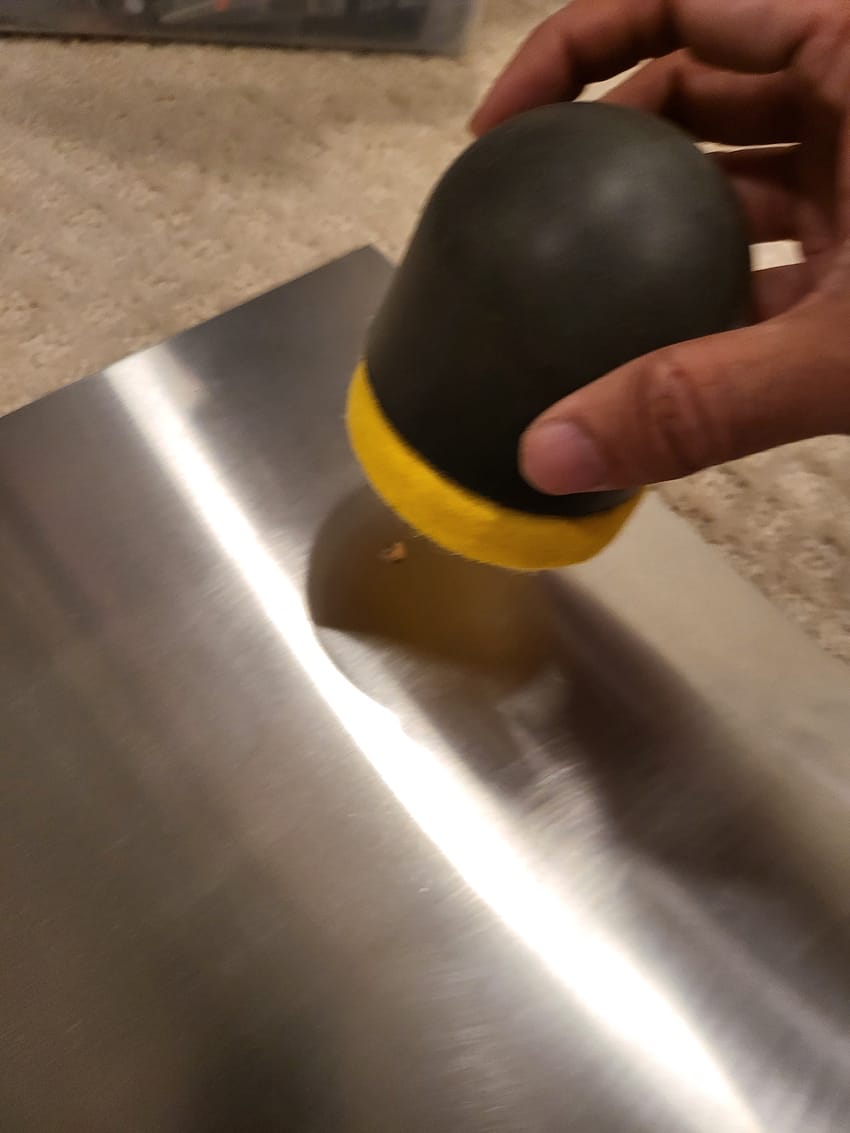 This post includes affiliate links to Amazon and other vendors. I may earn commission from purchases made through these links. However, the views and opinions here are my own and are based purely on my experiences using the products.

The three products that you’re most likely to come across are Scratch-B-Gone, Rejuvenate Stainless Steel Scratch Eraser, and the ScratchPro kit for Polishing and Repairing Sinks.

All three products reviewed work similarly, using a sandpaper for deep scratches, and then a medium abrasive buffer for creating clean brush lines of the stainless steel, and then a fine buffer/cleaner. However, the kits differ in polishing compounds and the specific brushes that they use.

Testing stainless steel scratch repair kits: how we did it

For the tests we purchased sheets of 304 stainless steel, at the same thickness as that used in our Viking range. The sheets were pre-brushed with a #4 brush, like most stainless steel appliances.

We then performed two different tests. For the first test, we used a screwdriver to create normal scratches (not too deep), and then we tried all of the stainless steel scratch repair kits on them. For the second test, we created a light scuff with fine sandpaper, and used the different kids to try to remove that.

The Rejuvenate Stainless Steel Scratch Eraser Kit is the cheapest and most common of the products here. You can buy it on Amazon, or at many local home improvement stores. But does it work?

The Rejuvenate stainless steel scratch repair kit is advertised to be used on appliances, and the online videos show it being used on stoves and ranges, as well as other appliances, such as refrigerators.

However, as we discussed here, you’re unlikely to be able to repair a refrigerator door panel with any of these kits (or any brushing technique at all) because they are often coated. If you damage a stainless steel refrigerator, you’re likely to have to replace the door panel.

The Rejuvenate kit comes with a holder, a microfiber cloth, a piece of sandpaper, and two abrasive scratch pads (much like those green sponges you have under your sink). It also comes with a cutting compound.

The Rejuvenate kit instructs you to apply the cutting compound, then first use the sandpaper for deep scratches, then use the coarser pad, and then the smoother pad.

In the end, you should be able to use the microfiber pad to clean everything up. But how does it work?

As noted earlier, we first tested the Rejuvenate Stainless Steel Scratch Eraser Kit using a scratch, which we created with a screwdriver.

Here is a picture of the scratch right before using the first piece of the kit on it.

While the scratch is not particularly deep (you can hardly feel it with your finger), it’s deep enough that you are expected to use the deep scratch sandpaper on it.

We placed the sandpaper on the handle tool and added some of the cutting compound. After brushing it back and forth along the grain, as instructed, this is what we had:

After the initial brushing with the sandpaper, you can see that the brush marks appear. From this image, it looks like the scratch is mostly gone; however, that’s just the camera angle. We will see in later pictures that the scratch is definitely still visible.

After using the sandpaper, we attach the coarse abrasive pad and scrub with the grain, as directed. Finally, we use the fine abrasive pad. After the two abrasive pads, this is how the stainless steel sheet looks:

After wiping off the cutting compound, you can see that the scratch is still clearly visible, although now we also have some brush marks that aren’t exactly parallel to the original brush marks.

Finally, we buff carefully with the microfiber cloth and cutting compound. Here’s what we end up with:

The scratch is still clearly visible, but the nice, clean original brushing is now covered with somewhat wavy brush lines (which you get because it’s hard to use sandpaper in an exactly straight line).

So what’s the verdict? If you’re trying to remove real scratches from your appliance, the Rejuvenate Stainless Steel Scratch Eraser Kit will likely disappoint. A real scratch is just too difficult to remove using this kit.

But what about light scuffing? We had somewhat better luck with the Rejuvenate kit and scuff marks. We were able to entirely cover the scuff but we still had the non-parallel brush marks at the end. If you absolutely need to get a light scuff out of a stainless steel appliance, you can try Rejuvenate, but you’ll end up with the wavy brush strokes you see in the pictures. Whether that’s an improvement over the scuff is up to you.

The ScratchPro Kit for Polishing and Repairing Sinks is another option for stainless steel scratch repair. Although it specifically says in the instructions that this kit is not for use on appliances, several people claim to have had success with it on their appliances.

The ScratchPro kit is a bit more beefy and well made than the Rejuvenate Stainless Steel Scratch Eraser Kit, but it’s also more expensive. But does it work any better?

The instructions for the ScratchPro kit are somewhat similar to the ones for the Rejuvenate Kit. The ScratchPro Kit for Polishing and Repairing Sinks contains the following: several pieces of sandpaper, abrasive pads, a buffing pad, cutting compound, buffing compound, and a handle.

This kit is different from the Rejuvenate kit in that the buffing and brushing pads are less abrasive, and there are two different compounds for buffing and cutting. The kit also comes with many pieces of sandpaper, so that you don’t run out while brushing.

ScratchPro kit for Polishing and Repairing Sinks: does it work?

So does the ScratchPro kit for polishing and repairing sinks work? We created a scratch in our stainless steel test sheet that is similar to the one we created for the Rejuvenate Stainless Steel Scratch Eraser. Here’s what we found…

You can see that the sandpaper that comes with the ScratchPro kit for Polishing and Repairing Sinks does a similar job to the Rejuvenate kit in brushing lines into the stainless steel.

However, like the Rejuvenate kit, the ScratchPro kit doesn’t really remove the scratch. Here, we buff the scratch with the yellow pad and the buffing compound:

After using both buffing tools, and the buffing compounds, here is our result. Unfortunately, the scratch is still there, and it’s still pretty prominent. One good thing about the ScratchPro kit over the Rejuvenate kit: the brush marks from the ScratchPro kit look a bit better, and you can create straighter lines using the ScratchPro kit.

Scratch-B-Gone is the oldest stainless steel scratch repair kit we’re aware of. In fact, we originally used it in 2010. However, it’s gotten hard to find and expensive. But is it worth it?

In our testing, we got nearly identical results with Scratch-B-Gone that we got with the Rejuvenate kit.

However, there was one major positive about Scratch-B-Gone over the Rejuvenate kit: because it has a larger handle and larger abrasive pads, it’s easier to create straight brush lines with the Scratch-B-Gone kit.

If you use Scratch-B-Gone for a minor scuff, it will give you a reasonable finish due to its large handle and abrasives. But in the right lighting it will generally be clear that this isn’t the factory finish.

In the end, we found all of the three stainless steel scratch repair kits to be similar in results. If you are trying to get out a real scratch in your stainless steel appliance, none of these kits are going to be particularly useful.

However, if you have a light scuff and want to remove it, we suggest investing in the Scratch-B-Gone kit, since the larger handle and larger abrasive pads makes it easier to get straight brush lines in the repair.

Unfortunately, with all of these kits, it’s difficult to get a good result. Our opinion would be to either buy a stainless brushing tool or to find a local scratch repair specialist.